Tomás and the Library Lady

Tomás and the Library Lady

Tomás’ family is moving to Iowa again, since his mother and father are migrant workers. They pick fruit and vegetables in the summer for Iowa farmers and in the winter for Texas farmers. Tomás loves to listen to his Papá Grande tell stories. Papá Grande tells Tomás that he is now old enough to visit the library to then share new stories. Tomás has never seen so many books in one place. The librarian asks what he would like to read about and he says tigers and dinosaurs. Soon Tomás forgets about the library lady, Texas, and Iowa. Instead, the story becomes alive as he rides a dinosaur. The time quickly goes by and the library lady lets him check out books. Tomás returns home and reads the new stories to his family. During his visits to the library, Tomás teaches the library lady Spanish words. Sadly, Tomás must say good-bye to the library lady and the place that made him feel welcome as the summer ends.

I really enjoyed Tomás and the Library Lady, because the stories really come alive when Tomás reads and shares the books. The book is based on a real person named Tomás Rivera who was a migrant worker and became a writer, professor, and national education leader. He died in 1984. Tomás and the Library Lady  won the  Tomás Rivera Mexican American Children’s Book Award, an International Reading Association Teacher’s Choice Award, and was nominated for the Texas Bluebonnet Award. 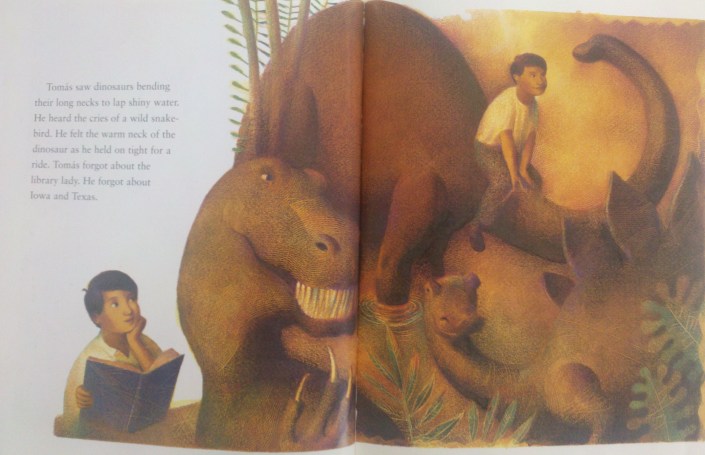