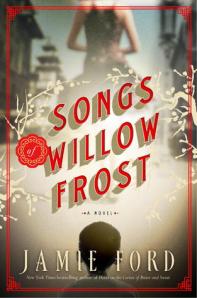 Jamie Ford’s new book, Songs of Willow Frost, releases today. Ford is the author of the popular book Hotel on the Corner of Bitter and Sweet. If you live near Seattle, Ford will give a book talk and signing tonight. For more information click HERE. Of course, my book review comes soon.

Here is the book synopsis:

Set against the backdrop of Depression-era Seattle, Songs of Willow Frost is a tale of two souls—12-year-old William Eng, a Chinese-American boy with dreams for his future, and Willow Frost, a movie star escaping her haunted past—both seeking love, hope, and forgiveness. Their stories trace an emotional journey of discovery that will resonate with anyone who has ever longed for the comforts of family and a place to call home.

This entry was posted in Book Announcement and tagged book release, Hotel on the Corner of Bitter and Sweet, Jamie Ford, Songs of Willow Frost.

Book Review: Hotel on the Corner of Bitter and Sweet

Hotel on the Corner of Bitter and Sweet

Hotel on the Corner of Bitter and Sweet is the story of Henry who is Chinese American growing up in the 1940s in Seattle. Henry notices items taken out of the Panama Hotel that has been boarded up. The items belonged to Japanese families forced to leave to internment camps during WWII. It brings back memories to his friendship with a Japanese American girl, Keiko. Henry’s father is against anything Japanese, so Henry must keep his friendship a secret. Keiko and Henry are American but feel out of place at school, since they stand out. The book moves from the past to the present. Many years later, Henry examines items in the Panama Hotel in the hopes to discover what he’s been searching for.

I finished this book for the second time and loved it just as much as the first time. There are true aspects in the book, which the author explains. Panama Hotel actually exists and items in the basement did belong to Japanese families. The Japanese internment camps and WWII events are also true.  At times, I felt that the author tried to squeeze anything relating to Seattle, into the book. (Perhaps that’s because I live south of Seattle.) Hotel on the Corner of Bitter and Sweet is a moving book that provides family relationships, cultural tensions, historical aspects, and even a hint of romance. I recommend this book.