This week’s photo challenge topic is indulge. My first idea was my delicious birthday cake. It was a cheesecake with a chocolate crust, chocolate topping, and cherries. I also included the recipe. 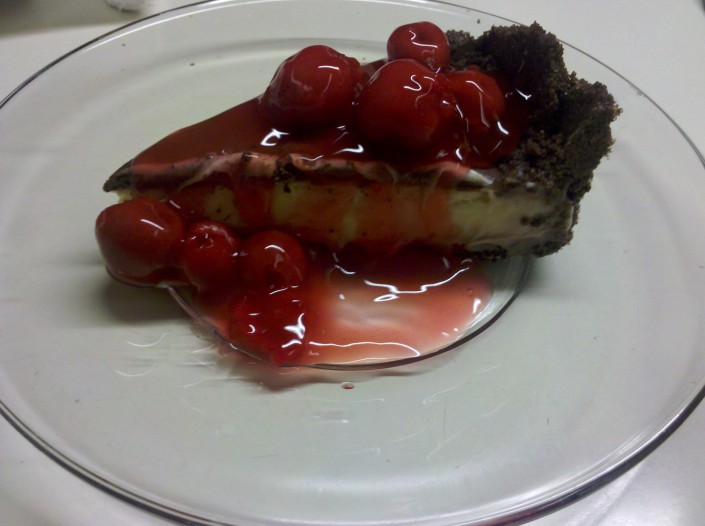 Cheesecake Filling:
3 (4 ounce) packages of cream cheese (I actually used Neuchâtel cheese. It tastes similar to cream cheese, but it has less fat.)
3/4 cup sugar
2 eggs
2 teaspoons vanilla
1 teaspoon lemon juice
Crust:
1 1/2 cups of graham cracker crumbs (In this recipe, I used chocolate flavored cookies.)
1/4 cup butter melted
1/4 cup sugar
Topping: (Optional)
1/2 cup melted chocolate chips
1/2 cup of low fat sour cream
cherries
This is the first time I tried chocolate with sour cream and it was a tasty success. Normally, I combine 1 cup low fat sour cream, 1/4 cup sugar, and 1 teaspoon vanilla.
Directions:
Prepare graham cracker crust in a food processor to get into a fine crumb. Press onto a 9 inch pie plate or springform pan. I used a springform pan. Bake at 300F for 10 minutes.
Mix the filling ingredients. Beat until it is completely blended and smooth. Pour into pie plate. Bake at 300F  for about 40 minutes. The center will no longer be wet and it may be slightly cracked, but it shouldn’t be brown. Let cool for 10 minutes.
Melt the chocolate chips in a microwave safe container for about 20 seconds. You can also use the double boiler technique, but that takes more time. Spread the sour cream/chocolate topping evenly. Return to oven for about 5 minutes to set with sour cream topping.
Cool to room temperature and refrigerate at least 5 hours before serving. It works best if the dessert is prepared the day before. The most difficult part of this recipe is waiting!
Variation: Normally, I add food coloring with the sour cream topping to make almost a frosting. Create a beautiful design that matches any holiday!

What is the difference between cream cheese and Neuchâtel cheese?

Cupcake isn’t technically a birthday book, but everyone enjoys a delicious cupcake on their birthday. The book begins when Cupcake was born (baked in the oven) then went off to meet his brothers and sisters. He discovered he was in a bright cupcake family that included Chocolaty Chocolate Cupcake, Polka-Dot Cupcake, Rainbow-Sprinkles Cupcake, and more. However, nobody picked Vanilla Cupcake because he was just too plain and white. Cupcake began crying, but then Candle hopped over and explained that he also has a fancy family. Candle’s family members include Number Candle, Twisty Candle, Colored Candle, and more. Candle has the bright idea that Cupcake needs a special topping. So, Candle and Cupcake experiment with different toppings. A few topping suggestions are pickles, spaghetti, peas, and even a squirrel. Candle discovers a nut on Cupcake’s head from the squirrel and hops up to get it off. Finally, Candle is now Cupcake’s topping. However, they still don’t realize that they’re the perfect match and continue testing toppings tomorrow. Cupcake is very humorous as each Cupcake has personality and the comments between Vanilla Cupcake and Candle are cute. The book includes a delicious recipe for plain vanilla cupcakes.

This concludes my birthday book celebration. I hope you enjoyed these birthday books! Thank you for all your birthday wishes! 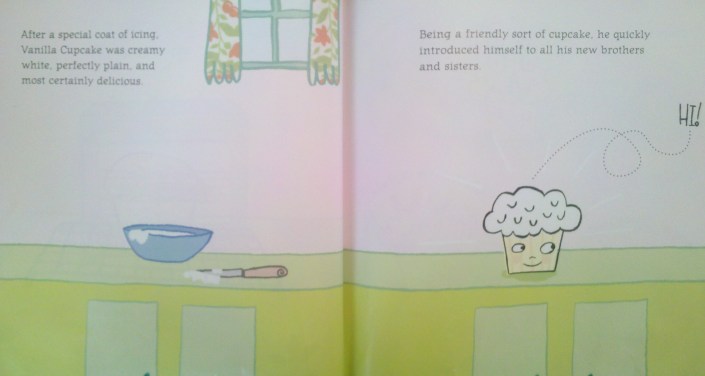 The Best Birthday Party Ever

The birthday girl has big plans for her birthday party, yet it’s still 5 months, 3 weeks, 2 days, and 8 hours away. She wants it to be the best birthday party that she’s ever had. Her party plans soon become very extravagant. A few items she plans to have at her birthday party are 9,000 pink balloons, the tallest cake in the world, a magician, a parade, camel and elephant rides, and even fireworks. She even believes the President of the United States and the Queen of England will send her birthday cards. After months of planning, her birthday finally arrives but she doesn’t find everything on her list. However, she does discover pink balloons, tons of frosting, and the guests sing so loudly they must cover their ears. Her grand plans may not be at her party, but she’s still having the best birthday party ever. Of course, it’s never too early to start planning for next year. 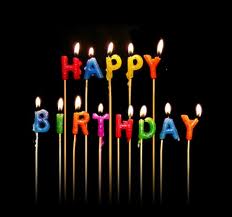 Scaredy Squirrel Has a Birthday Party

Scaredy Squirrel’s birthday is approaching and he decides to throw himself a party. The guest list is very small – just himself. There are many surprises that Scaredy Squirrel thinks will destroy a party which includes clownfish, ants, ponies, porcupines, Bigfoot, and confetti. He keeps a list of exactly what needs to be done so everything runs smoothly at the party and there are no unwelcome surprises. Scaredy Squirrel picks a safe location, practices breathing to blow balloons, and mails an invitation to himself. He then decides to invite one guest, so the party plans are revised so no bad surprises happen. Scaredy Squirrel even practices conversations, reviews activities that should be done at a party, and plans the party schedule. He’s most comfortable sitting quietly. However, Scaredy Squirrel is surprised when party animals arrive at his party. After he panics, screams, and finally passes out for a few hours Scaredy Squirrel notices that all the animals are ready for him to blow out the candles. He’s so touched that he decides to plan and invite guests for next year.

Scaredy Squirrel Has a Birthday Party is the fifth book in a series. Oh, I wish I discovered Scaredy Squirrel sooner because I often feel the same way at parties. Perhaps not as nervous as Scaredy Squirrel, but I’m not a fan of people singing Happy Birthday to me and nobody would ever surprise me with a party. The illustrations are very humorous as the reader sees his party plans. 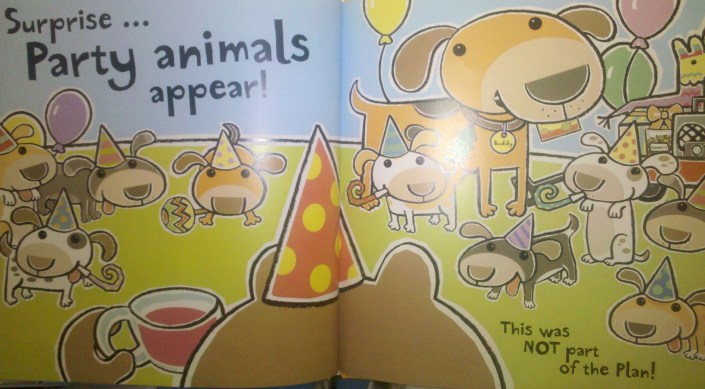 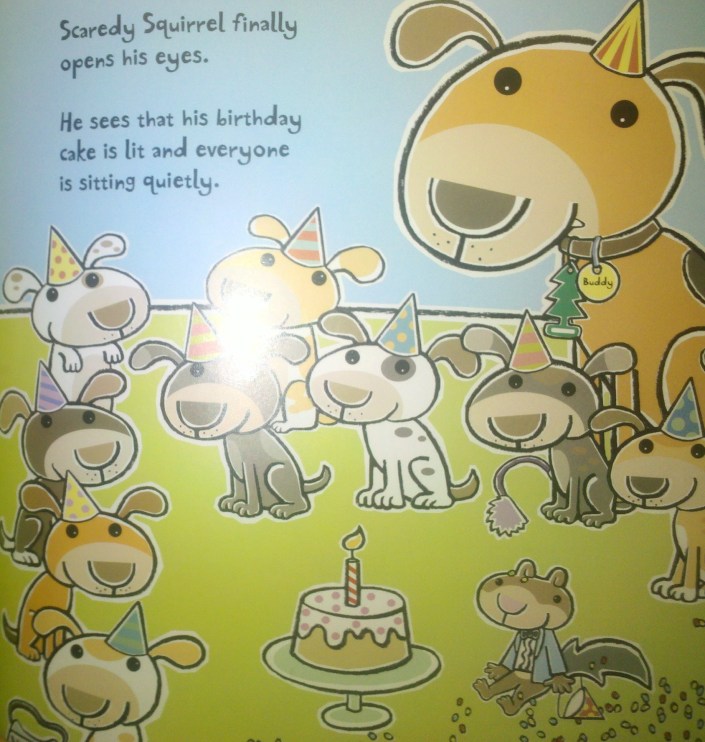 Book Review: Every Year On Your Birthday

Every Year On Your Birthday

Every Year On Your Birthday is based on the author’s experience adopting a girl from China. The story begins when the woman thinks back to how she wasn’t there at the girl’s birth, but she was home waiting to be her mother. The girl gradually grows up as the book celebrates to her fifth birthday. Each birthday brings something new. On her first birthday family celebrates as she blows out candles, her second birthday she becomes a United States citizen, her third birthday she flies a kite at the beach, her fourth birthday she receives a puppy, and her fifth birthday is celebrated at a picnic watching the dragon boat festival. The story also goes back to the girl’s time in China, such as when she was in the nursery with other Chinese baby girls waiting for adoption. Every Year On Your Birthday is a wonderful book with beautiful illustrations. There is a good mix with Chinese and American cultures to celebrate her birthday. Rose Lewis wrote another book, I Love You Like Crazy Cakes, based upon her travels to China when she adopted the girl. 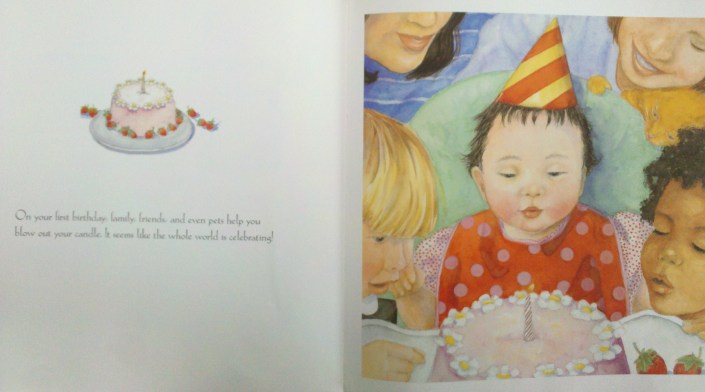 Ben is hosting a surprise party for his friend Doris the dragon. Of course, this isn’t your typical party because monsters are on the guest list. The guests include an alien, ghost, robot, mummy, skeleton, and vampire. The book is simple, but very humorous since monsters act and talk differently. There’s brief text, but also jokes and conversations between the guests. A few party highlights include: the robot destroys a piñata, the mummy dances the twist, the ghost jump ropes, Ben gets stuck on the ceiling after playing parachute, and everyone runs when the dragon blows out the birthday candles. I think adults will also get a laugh from the jokes, such as Ben asks the robot if he’d like some nuts and the robot’s response: ‘No thank you… robot prefer bolts!’. Happy Birthday, Monster! is a cute book that will get laughs and no scares. 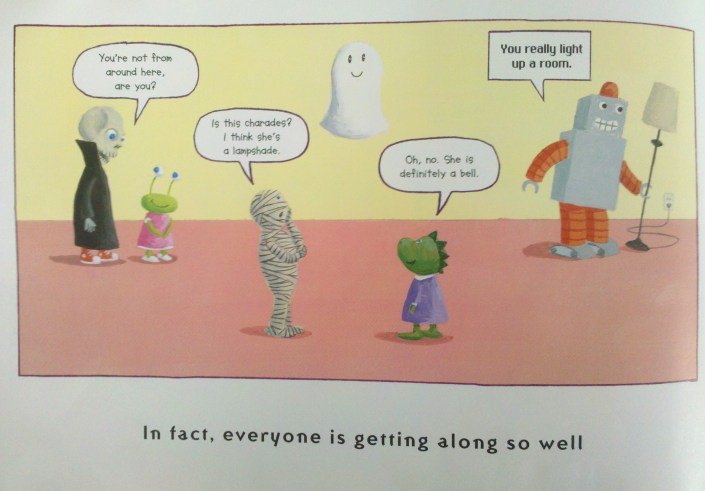 Book Review: On the Night You Were Born

On the Night You Were Born

On the night you were born, the moon smiled with such wonder that the stars peeked in to see you and the night wind whispered, “Life will never be the same.” Because there had never been anyone like you…ever in the world.

Heaven blew every trumpet and played every horn on the wonderful, marvelous night you were born.

Nancy Tillman (On the Night You Were Born)

On the Night You Were Born is a sweet melody as it celebrates when you were born into this world. The message throughout the book is that there is only one you and the world will never be the same now that you are here. Musical notes fill each page as the sound of your name travels through all lands. It travels across the ocean, through trees, and past farmlands. When the great news of your birth was heard the panda bears danced, the geese flew home, and the moon stayed up until the morning. The pictures are beautiful and the words are poetic. Both young and old readers will smile as they imagine how the world changed when they were born. 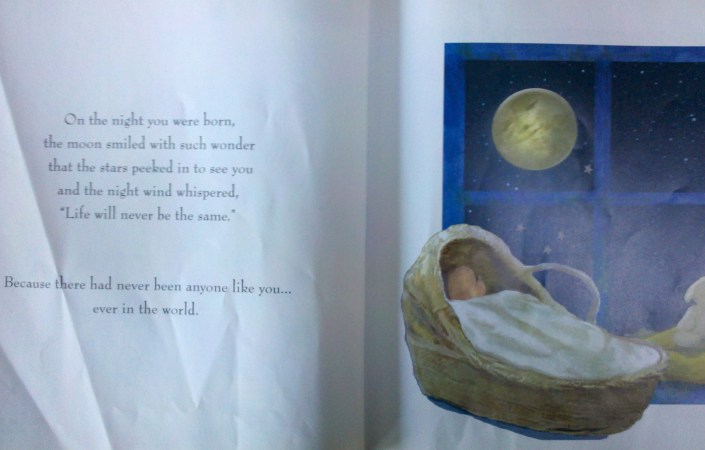 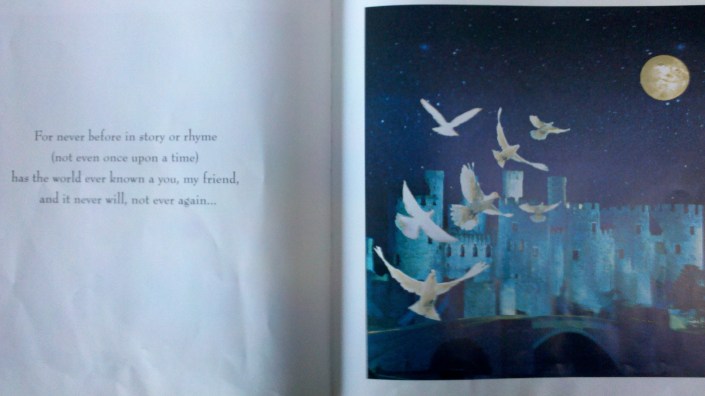 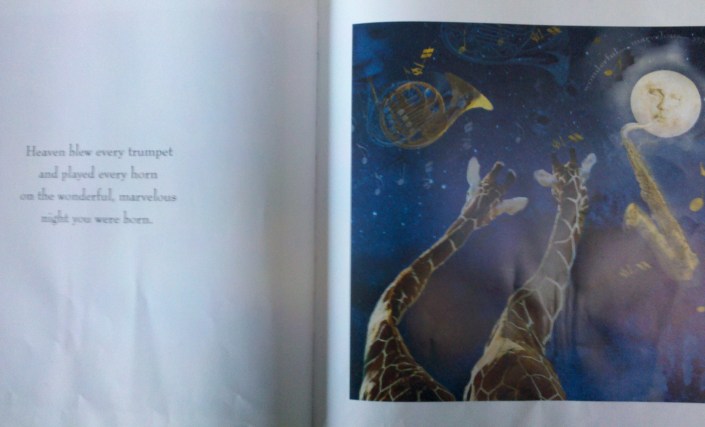