This week’s photo challenge is summer lovin’. Show the pleasures and delights of summer. For the first time this summer I’ve experienced numerous baseball games. I watched the Seattle Mariners and the Tacoma Rainers. Today, I attended a Tacoma Rainer’s game on a beautiful blue sky and warm summer day. It was a little scary at times, but we won 4-3. I had the best hot dog with all the fixings!

This week’s photo challenge theme is ‘inside’. I decided the inside subject would be myself. I attended my first Seattle Mariner‘s baseball game this summer. (I think they won because I was there.) I took a photo sitting inside the giant mitt outside the stadium. Another photo shows me inside a llama. Why? I went to a ‘knit and pitch’ event at the game. There was yarn and other supplies to buy. I bought nothing knitting related, instead just tons of baseball food that got me a little sick. I also included photos inside the stadium. 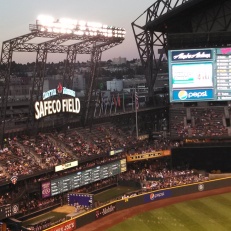 Check out more inside photos here:

Jack Calhoun and the Perfect Baseball: A Boy’s Baseball Adventure during the Civil War

Jack Calhoun is a typical 10-year-old boy who lives in Shenandoah Valley, Virginia, during the early 1860s. Baseball is Jack’s passion. Jack and his friends simply played casual ‘townball’ until a Confederate solider explained the official rules of baseball. Jack’s days are not always filled with fun baseball games. The Civil War has begun and Jack faces bullies on a daily basis from ‘Scrat the Rat’ and his gang. Jack’s father is a Quaker who doesn’t believe that war is the right choice, so he goes away into the mountains. Before Pa leaves he gives Jack a homemade hog skin baseball that Jack treasures and always keeps with him.  Now Jack must be strong with his Ma and younger siblings on the farm. While Pa is away Jack deals with the Home Guard who visit each house to demand all capable men fight against the Yankees and confrontations with his bullies. Jack even plans a humorous revenge on the bullies. Finally, Pa returns when the Exemption Act is passed which allows individuals with religious beliefs against fighting to avoid being in service. Jack’s life is somewhat back to normal with his Pa back and fewer bully situations. Baseball is always in Jack’s heart through all his hardships.

I thought Jack Calhoun and the Perfect Baseball was wholesome, humorous at times, and educational without being boring. Children won’t realize that they’re actually learning about the daily life during the Civil War, instead they’ll gain pleasure as they read about baseball and typical bully pranks. This book can be used to spark children’s interest while teaching about the Civil War.

Visit the author’s Goodreads blog and on Smashwords.