Prompt: ‘Write about finding something.’

“I hope this is a good player. I don’t want to wear someone who sucks”.

I said this while scanning Seahawks shirts in October 2013 at Target. I was hesitant to own any Seahawks apparel. It was all new to me. My now boyfriend handed me a Wilson #3 shirt and said this was a good pick. I made him buy one too. We were now matching with Wilson #3. This was my very first sport’s apparel at all.

He gradually taught me football rules and how things worked. In the process, I made up a few of my own terms. (Perhaps, the NFL can use my suggestions.) During this time I proudly wore my Wilson shirt. I slowly learned he was a good player. I wore my Wilson on every Blue Friday, Sunday, and if Seahawks played on a Monday or Thursday. It got so soft after many washes and it seemed to fit just right. Then something awful happened, I lost Wilson.

While unpacking from a trip with my boyfriend, I discovered I couldn’t find Wilson. I searched again and again, but it just wasn’t there. Now by this time I owned more Seahawks apparel, especially after their Super Bowl victory. I even had a jersey in my closet. However, none compared to Wilson. Wilson was my first Seahawks item and connected me to the spirit. I slowly accepted the loss of Wilson, but was still sad. Other shirts just weren’t the same. My boyfriend offered to get me a new Wilson, but even he knew it wasn’t the same. Then my luck brightened.

While searching through my boyfriend’s clothing I found Wilson. My heart leaped at seeing it, but then saddened because I knew it was just his matching shirt. Or was it? I took the shirt and hugged it then looked closely. It was my size. This was my Wilson! I found Wilson! I quickly put it on, smiled, and did a happy dance. I had Wilson back. 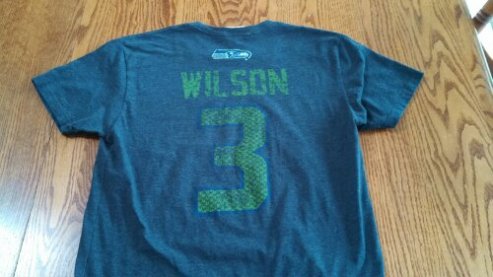 I was very happy to find it! 🙂