How exactly did the twenty-six letters form the alphabet that we know today? Well, it occurred long ago when a king announced that he wanted someone to arrange the twenty-six letters. A man named Al Pha made a personal bet with himself that he would indeed make the perfect arrangement for the letters. It started with A for his name then gradually everything seemed to naturally fall into place as he organized the letters. When his friend Jay came to visit HI J was formed. Near the middle Al became discouraged, but he told himself NO that he needed to finish. Finally, Al Pha presented his arrangement to the king who then sang the letters. Well of course the king asked Al if ‘this time won’t you sing with me?’ The king loved Al Pha’s letter arrangement and decided it would be known as Al Pha’s Bet.

I absolutely loved Al Pha’s Bet! The writing was fun and humorous with brilliant pictures to match the writing. The alphabet slowly forms on the pages as you read. After reading Al Pha’s Bet you’ll almost agree with how the letter arrangement formed. I’m sure children and even adults will laugh while reading this book. 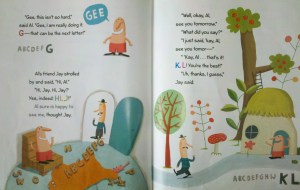 I think I would love this book! 😀